Ah, so as I’m sure you’re already Aware, with regards to Enlightenment, Liberation, Moksha (whichever Label you prefer), there are the Sudden proponents and the Gradual proponents … now the “issue” (so-to-say) the former have with the latter is that to Follow-a-Gradual-Path requires some Entity but right from the very beginning, according to the former, no such Entity “exists” to do so !

Or, similarly, for the Gradualists it’s like giving instructions to an apparent Wave-upon-the-Ocean that will (with great diligence) result in the Wave realizing its Oceanic-like-Nature eh ?

But what I’m saying is that the Wave is ALREADY the Ocean, it was never really separate from the Ocean, it never “left” the Ocean (so-to-say), it doesn’t have to “merge” or “return” to the Ocean because its notion-of-itself is just an Empty Designated Conceptual Construction based upon the non-Recognition of its basic Watery-Nature eh ? Thus IF this is seen clearly it may “induce” the sudden Collapse of all the Wave’s Fictional Dilemmas and as such “it” (the illusory “I” or self as the Wave) simply Vanishes eh ?

You are always only the non-Dual “Ocean of Great Perfection” however it Appears !

“I believe deeply that we must find, all of us together, a new spirituality. This new concept ought to be elaborated alongside the religions in such a way that all people of goodwill could adhere to it.

“Until we realize that intrinsic awareness is already present, we must understand that striving to generate that awareness is a wrong path”

“Awareness abides as the aspect which is aware under any and all circumstances, and so occurs naturally, without transition or change”

“No matter what circumstances or what worlds we find ourselves in, we are without any expectations or changes. We are just what we are, the Natural State which is like a mirror”

But to illustrate what is truly meant, Esoterically, by the phrase “To Fall In Love“ :

“When the mind eventually sinks into the Heart, undisturbed bliss is overwhelmingly felt. There is then a feeling which is not divorced from pure awareness, as an example, head and heart become one and the same” 💜 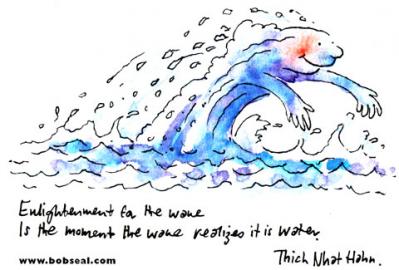 A Short Video : The Ocean and The Wave Parable