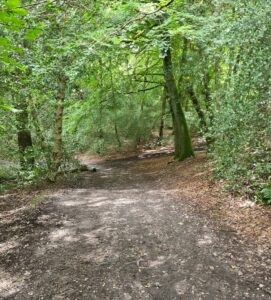 Oh, now, in “returning to nature” if only to de-stress yourself, perhaps spending time sat beside a lake or walking along some path, don’t you sometimes FEEL a sense of non-separation, calmness or perhaps even earthly-inspiration eh ?

Do you perhaps sense your mind slowing down, a sense of clarity comes to the fore, like a simple beingness uninterrupted by the “hustle and bustle” of modern life’s “needs and wants” ? 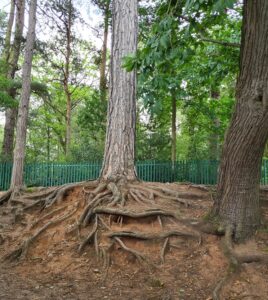 So, as it was, in seeing these exposed roots below the trunk-of-the-tree, it occurred how such an organic-structure could represent the Human Psyche … but is what “drives us” really “in tune” with Reality-as-it-is or is our apparent Self-Determination based upon faulty-reasoning [1], by which I mean unquestioned (inherited) Assumptions eh ? 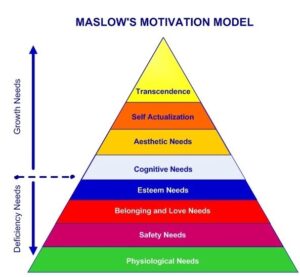 Maslow later subdivided the triangle’s top to include self-transcendence, also known as spiritual needs. Spiritual needs differ from other types of needs in that they can be met on multiple levels. When this need is met, it produces feelings of integrity and raises things to a higher plane of existence. In his later years, Maslow explored a further dimension of motivation, while criticizing his original vision of self-actualization. By these later ideas, one finds the fullest realization in giving oneself to something beyond oneself—for example, in altruism or spirituality. He equated this with the desire to reach the infinite. “Transcendence refers to the very highest and most inclusive or holistic levels of human consciousness, behaving and relating, as ends rather than means, to oneself, to significant others, to human beings in general, to other species, to nature, and to the cosmos”

Now, you may or may not agree with Maslow’s theoretical model above, but in general I’d say it quite accurately represents typical (so-called) Western Culture eh ? However, how does it compare to (so-called) Eastern Culture ? Is it really so different ?

Indeed, perhaps counter-intuitively, as I see it, in order to “reach” the pyramidal Summit what is necessary is for you to Contemplatively “plumb-the-depths” of your Psyche eh ? To bring-to-light what is generally an assortment of Unconscious (collective ?) processes !!!

[1] Oh, AFAIC it’s not that any of us are independent-entities inhabiting some pre-existing-universe, instead I suggest, that’s just a false-sense-of-separation intended to ensure our Security and Survival … you could call it Self-Determination eh ?

2 thoughts on “On Self-Determination”