A Prayer of Aspiration ! 6

Oh, perhaps “you” weren’t Aware that it’s like a game of “Hide and Seek”, wherein each of us, “I” suggest, is actually a Buddha but having the appearance of a Samsaric-Sentient-Being eh ? Now if you’re looking for the “Way Out” [1], the Answers, I’d say all lie Within !!! 😉 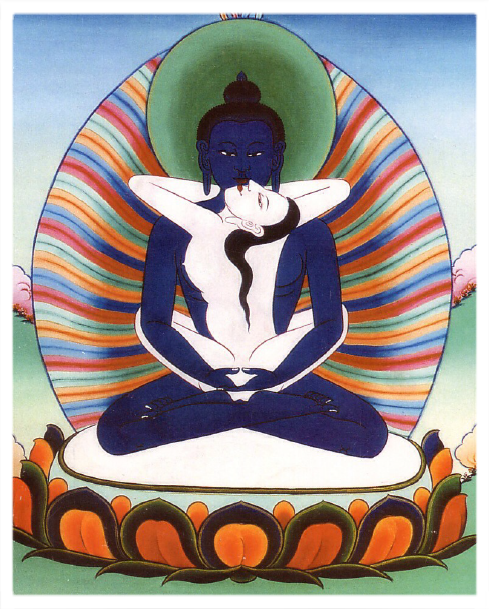 Ho! All that appears and exists, saṃsāra and nirvāṇa,
Has one ground, two paths [3] and two forms of fruition,
The magical displays of awareness and unawareness.
Through this, Samantabhadra’s prayer of aspiration,
May all attain complete and perfect awakening
Within the palace of dharmadhātu, the absolute sphere.

The basis of everything is uncompounded,
A self-originating expanse, vast and inexpressible,
Beyond the names ‘saṃsāra’ and ‘nirvāṇa’.
This itself, when seen, is awakening.
But in their ignorance beings wander in saṃsāra.
May all sentient beings throughout the three realms
Realise the meaning of the ineffable ground!

I, Samantabhadra, know the ground’s reality,
Which is without cause or condition;
It originates by itself within this very ground,
Is unspoilt by perspective, supposition or denial,
And unobscured by the darkness of unmindful delusion.
That which is self-manifest is thus without fault.

When abiding in genuine intrinsic awareness,
There is no fear, even at the triple world’s demise.
Nor is there attachment to the five sensory delights.
In self-originating awareness free of concepts,
There is neither solid form nor the five poisons.
The unobstructed clarity of awareness
Is one in essence and fivefold in wisdom.

Through the ripening of the five wisdoms,
The five original buddha families arise.
And through wisdom’s further expansion
The forty-two peaceful buddhas emerge.
With the upsurge of fivefold wisdom’s power,
The sixty blood-drinking herukas appear.
Thus, ground awareness has never known delusion.
I am the primordial buddha and therefore
Through this, my prayer of aspiration,
May beings of saṃsāra’s three realms
Recognise self-originating awareness,
So that vast wisdom may be perfected.

Continuously my emanations will appear
In their many billions, beyond imagining,
Manifest in varied ways according to need.
Through this, my compassionate aspiration,
May all the beings of saṃsāra’s three realms
Escape their plight among the six classes.

From the very first, since awareness does not dawn
For deluded beings within the ground,
They are entirely mindless and confused.
This itself is unawareness, delusion’s cause.
And then, as if out of a sudden daze,
There is anxiety and mental disquiet,
From which notions of self and other and enmity appear.
As this habitual tendency is then reinforced,
Saṃsāra unfolds in its regular progression.

Thus, mind’s afflictions, the five poisons, develop,
And actions born of these five poisons never end.
Therefore, since the basis for beings’ delusion
Is a lack of mindfulness, an absence of awareness,
Through this, my aspiration as a buddha,
May all beings recognise their own awareness.

The unawareness that is co-emergent
Is a state of mindlessness, distraction.
The unawareness that designates
Is dualistic clinging to self and other.
These two ignorances—coemergent and conceptual—
Provide the basis for the delusion of all beings.
Now through this, my aspiration as a buddha,
May the dark and murky gloom of mindlessness
Among all sentient beings in saṃsāra be dispelled;
May their dualistic perceptions be purified;
And may they recognise their very own awareness.

A mind of dualistic clinging is one of doubt.
From subtle attachment, once it has arisen,
Habitual tendencies gradually gain strength.
Food, wealth, clothing, home and companions,
The pleasures of the five senses, or dear relations—
Whatever is attractive brings the torment of desire.
These are the delusions of the world.
Actions based on dualistic clinging are unending.
When the fruits of attachment come to ripen,
They bring birth as a preta tormented by desire.
How wretched are the pains of hunger and thirst!

Now through this, my aspiration as a buddha,
May beings beset by craving and attachment
Neither cast aside the torment of desire
Nor pursue the craving of attachment.
But by allowing the mind to relax just as it is,
May they capture the natural state of awareness
And gain the wisdom of perfect discernment.

Through the subtle stirrings of anxiety and fear
Towards the appearance of external objects
Habitual tendencies of aversion are reinforced,
Opening the way to enmity, injury and slaughter.
When the fruits of aggression come to ripen,
How harrowing will be the boilings and burnings of hell!
Now through this, my aspiration as a buddha,
May all the sentient beings of the six realms
Whenever they are beset by intense aggression,
Neither reject nor indulge it, but relax therein,
Capture the natural state of their own awareness,
And gain the wisdom of lucid clarity.

When the mind grows conceited
It brings thoughts of rivalry and disdain,
And the arising of intense pride
Leads to the suffering of quarrels and disputes.
When the fruits of such karma come to ripen
They bring birth as a deva subject to passage and fall.
Now through this, my aspiration as a buddha,
May all sentient beings in whom conceit is born
Relax their minds there and then,
Capture the natural state of their own awareness
And realise the true meaning of equality.

Habitual tendencies of intense dualistic clinging
Bring about the pain of self-flattery and contempt,
And by inflaming conflict, dispute and competition,
Lead to birth in the asura realm of slaughter and mutilation,
Which in turn results in descent to the domains of hell.
Now through this, my aspiration as a buddha,
May those in whom rivalry and antagonism take root
Not regard them as enemies but relax there and then,
Capture the natural state of their own awareness
And gain the wisdom of unimpeded activity.

Mindlessness, indifference, distraction,
Dullness, drowsiness, oblivion,
Insensibility, laziness and stupidity
Result in helpless animal wandering.
Now through this, my aspiration as a buddha,
May the light of clear cognizance arise
In those plunged into stupidity’s gloom,
And may they gain wisdom free of thought.

All sentient beings throughout the three realms
Are equal to me, the buddha, in the ground of all,
Yet for them it is but a base of mindless delusion.
And now they engage in meaningless pursuits,
With sixfold karma as if deceived by a dream.
Yet I am the primordial buddha,
Guide to the six classes through my emanations.
Through this, Samantabhadra’s prayer of aspiration,
May all sentient beings without exception
Awaken within the dharmadhātu, the absolute sphere.

Aho!
Henceforth, whenever a powerful yogi,
With naturally clear, undeluded awareness,
Recites this powerful aspiration,
All sentient beings who hear it
Will awaken within the course of three lives.

At the times of solar or lunar eclipses,
Whenever the earth rumbles or quakes,
At the solstices or close of the year,
Visualize yourself as Samantabhadra,
And chant this aloud so that all may hear it.
Then all the beings of the three realms
Will, through the yogi’s prayer of aspiration,
Gradually be freed from their suffering
And ultimately awaken as a buddha.

[2] There are several Translations of this Prayer but the majority of it, as above, is taken from Prayer of Kuntuzangpo (Kunzang Mönlam) 🙏❤️
[3] Click link to Google It ! 😉

6 thoughts on “A Prayer of Aspiration !”