Awaken from the Dream ! 3

Oh, so in the context of non-Duality, you’ve probably already heard about “awakening from the dream of separation” eh ?

But what does this mean and how is it “done” ? Well, for whatever reasons, I have, it seems, a strong affinity for the Dzogchen teachings, not that I’m here trying to “wax lyrical” about them or attempting to convert “you” in any way, LOL, nor could “I” even if I wanted to, haha … I mean, this is the point in ALL the non-Dual teachings isn’t it : That there is actually no permanent-enduring-self (appearing largely as the “I” thought) eh ?

Now, in Buddhism, you can’t get anywhere (so-to-say) without becoming very familiar with the concept of Emptiness ! This is the Principle that upon examination (in a “deepening” and progressive fashion), deconstructs absolutely ALL our Beliefs, Concepts and Ideas there are about “Reality” (lookup “twofold emptiness” ?) !!!

However Intellectual Understanding of it is not enough eh ? Indeed, what I’m suggesting is that “it” must be Firmly Applied in such a manner as to Expose ALL one’s hidden Assumptions and thus far Unconscious Inherited Beliefs (“bring the darkness to light” comes to mind) … nonetheless as far as I’m concerned this isn’t about apportioning Blame (or some such Moralistic Judgement as a possible explanation for the state-of-the-world) but rather to Dispel the Unreality of our “samsaric” Existence to reveal, I propose, the Underlying Reality (i.e. to truly get “Grounded” as-it-were) eh ?

You see, it’s impossible when Contemplating Non-Duality, to retain the notion that there is an Objective World (and by extension Universe) “out there” (as seen from “in here”) because fundamentally it becomes clear that the Belief in such a Dichotomy is itself illusory, mere Conceptual Designation !!!

Thus what I’m getting at is to suggest (however unlikely “it” seems) Consciousness (or Awareness) is the Archetypal “substratum” and NOT “matter” (as is commonly accepted) eh ?

It was Max Planck (the Father of Quantum Theory) who said :

And perhaps more surprisingly, it was Albert Einstein who said :

Reality is merely an illusion, albeit a very persistent one 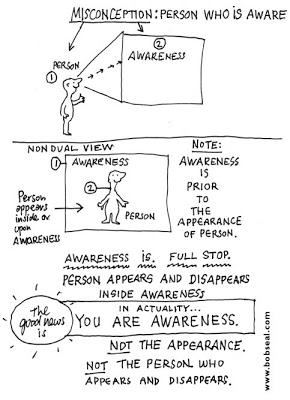 So HOW do “you” come to such a realisation ? If you have no interest in Dzogchen then there is probably no point in reading further about Self-Liberation eh ?

The particular method of Dzogchen is called the Path of Self-Liberation, and to apply it nothing need be renounced, purified, or transformed.

Whatever arises as one’s karmic vision is used as the path. The great master Pha Tampa Sangye once said:

It’s not the circumstances which arise as one’s karmic vision that condition a person into the dualistic state; it’s a person’s own attachment that enables what arises to condition him.

If this attachment is to be cut through in the most rapid and effective way, the capacity for self-liberation inherent in the primordial state must be brought into play.

The term self-liberation should not, however, be taken as implying that there is some ‘self’ or ‘ego’ there to be liberated.

It is a fundamental assumption, as we have already said, at the Dzogchen level, that all phenomenon are devoid of self-nature and it is understood that no phenomena has inherent existence.

Self-Liberation, in the Dzogchen sense, means that whatever manifests in the field of the practitioner’s experience is allowed to arise just as it is, without judgment of it as good or bad, beautiful or ugly.

And in that same moment, if there is no clinging, or attachment, without effort, or even volition, whatever it is that arises, whether as a thought or as a conceptualization of a seemingly external event, automatically liberates itself, by itself, and of itself.

Practicing in this way, the seeds of the “poison tree” of dualistic vision never even get a chance to sprout, much less to take root and grow.

From : Namkhai Norbu’s The Crystal and the Way of Light

Thus at such a point, upon the cessation of the “self”, I would say Bodhicitta is then the predominant Driving-Force in Life eh ?

When the mind eventually sinks into the Heart, undisturbed bliss is overwhelmingly felt. There is then a feeling which is not divorced from pure awareness, as an example, head and heart become one and the same 💜

3 thoughts on “Awaken from the Dream !”